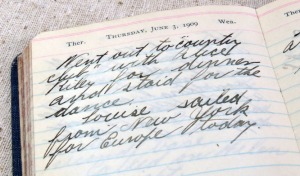 Tuesday, June 1, 1909
Played in ball game this p.m. between upper classmen and lower classmen in the house.  Former won 13 – 2.  Played center, first and second base.  Called on Helen J. tonight.

Wednesday, June 2, 1909
Studied this p.m. and tonight.  Attended short meeting of a bowling committee at the Phi Gam house right after supper.

Thursday, June 3, 1909
Went out to country club with Alice Riley for dinner and staid for the dance.  Louise sailed from New York for Europe today.

Saturday, June 5, 1909
Took final exams in “History of Philosphy” and “The Money Market” this a.m.  Took final exam in Accountancy this p.m.   “Unc” Harding gave the Senior Class a theater party at the “Walker” tonight and afterwards we ate lunch at McCormick’s.

Sunday, June 6, 1909
Attended dinner given to the Senior class by Mr. and Mrs. Swigart at their home this noon.  Studied all this afternoon and tonight.

Wednesday, June 9, 1909
Took final in “Economics 11” today.  Went down town this p.m. and then to the Walker with Billy May.  Played cards for a while tonight. 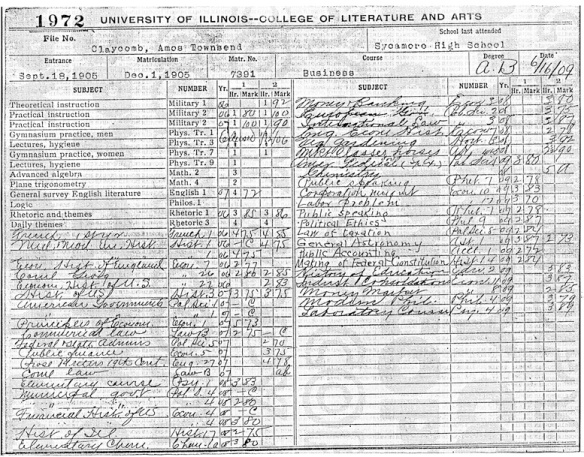 Saturday, June 12, 1909
Came into Chi- this a.m. with Helen Jordan.   Ate dinner with Uncle Will Tapper at the “Hamilton Club.”  Saw matinee at the “Troc” this p.m. and saw “The Sins of Society” at McVicketts after supper.

Monday, June 14, 1909
Got back in Champaign early this a.m. and went to the “Class Day” exercises at 10 a.m.  Ten of the fellows are having a house-party at the house but I have not a girl.  Took Alice R. down to a bank concert on the campus this p.m.  Took Mrs. Swigart to watch the “Senior Ball” for a while tonight.

Tuesday, June 15, 1909
House-party bunch kept me up all of last night and so I slept a little this a.m.  Went out driving with Alice R., Goat Reynolds, Buzz Ward, Beardsley and Miss Moffatt this p.m.  Father and Uncle Will came down tonight.

Wednesday, June 16, 1909
Attended the “Commencement Address” and received my degree of “Bachelor of Arts” and my diploma this morning.  Took father and Uncle Will out driving this p.m. and showed them the town.  We all started home at 6:10 and father and I reach Syc- about one o’clock. 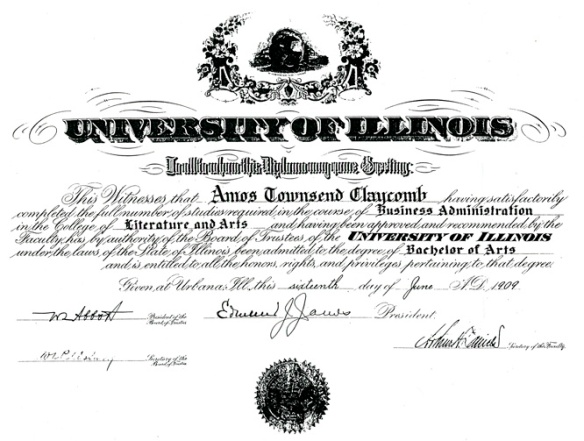 Thursday, June 17, 1909
Slept most of the morning and went up town this p.m.  Attended “Commencement Address” for the High School this evening when father distributed the diplomas.

Friday, June 18, 1909
Pulled mustard out of the oats all day.  Attended stated meeting of the Blue Lodge tonight.  After this I went up to an Alumni dance for a while.

Saturday, June 19, 1909
Drove over to the Wickstrom farm with father this a.m.  Planted pumpkin seed all the p.m.  Attended dance given by the Park’s family tonight.

Sunday, June 20, 1909
Went to church this a.m. with father.  Also with him over to DeKalb this p.m. to see a ball game between Sterling & DeKalb which broke up in a row when Sterling left the field because of some rotten umpiring in favor of DeKalb.  Staid home tonight. 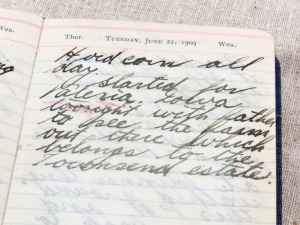 Tuesday, June 22, 1909
Hoed corn all day.  Started for Valeria, Iowa tonight with father to see the farm out there which belongs to the Townsend estate.

Wednesday, June 23, 1909
Reached Valeria at six this a.m. and drove out to the farm which is eight miles away.  Drove over the farm – 1100 acres – this forenoon, ate dinner there, walked around this p.m. and drove back to town about three.  Took train to Marshalltown and ate supper there and then took a sleeper home on the Great Western.

Monday, June 28, 1909
Plowed corn all day.  Played cards up at the Commercial Club for a while tonight.

Tuesday, June 29, 1909
Drove over to Maple Park in Rob Graham’s machine to look at some horses with father and Rompf.  Went over to DeKalb to a band concert after supper with Maynard and Murphy.