From the back of the photo:  Main Street, Wayne, Nebraska.  About 1880.  Boyd Hotel on right side.  The photo belonged to John T. Bressler, my great grandfather. 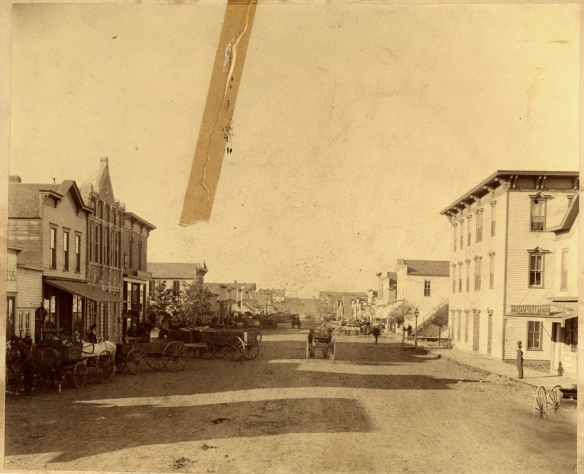 There is something endearing about old taped photos.  If my sense of direction is correct, this is facing north.

My grandmother, Ruth Bressler, and her sister, Kate Bressler, attended the Birmingham School for Girls in Pennsylvania.

I’ve done my best deciphering my grandmother’s handwriting, but if you see errors in any of the names, please let me know.

This is my grand aunt Dorothy Bressler’s Sunday School class in Wayne, Nebraska.  Probably the Methodist church or maybe the Presbyterian.  Dorothy was born in 1897 and these girls look 10-12 years old (?) which would put the photo as 1907-09.

I think Dorothy wrote these names on the back.  Your guess is as good as mine (the spelling is only approximate):  Mary O’Neal, Lizzi Parry, Serena Howser, Hester McNeal, Elizabeth Miner, Dorothy Bressler, Gladys Golder, Edith White, Mary Wilson, and Mrs. Miner.  I cannot even identify Dorothy. 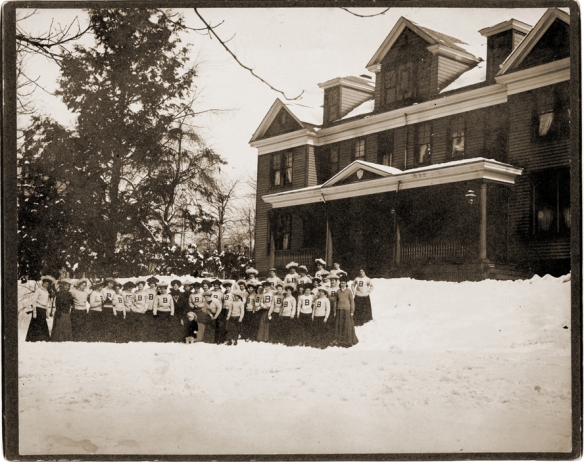 The Bressler girls in a class photo from the Birmingham School for Girls, Pennsylvania, 1906.  Kate Bressler is 9th from the left, Ruth Bressler is 13th (just behind and to the right of the small child).

And a later photo when the town had trees! 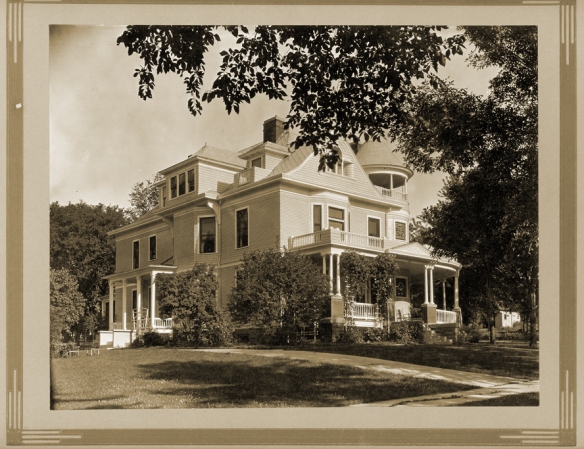 Howard Duncan was my grandfather’s brother.  He was a pharmacist and one of the few things we have from him is this handwritten recipe for Menthol Cream.  Menthol Cream is often an ointment for muscle aches.

20 grains menthol and 20 grains campor [camphor] – add a drop of alcohol.  10 drops oil of wintergreen and 1 5-cent jar of Vasiline.
The handwriting on the top of the reverse is my grandfather’s.  I’m not sure what the second line means and I don’t recognize the handwriting. 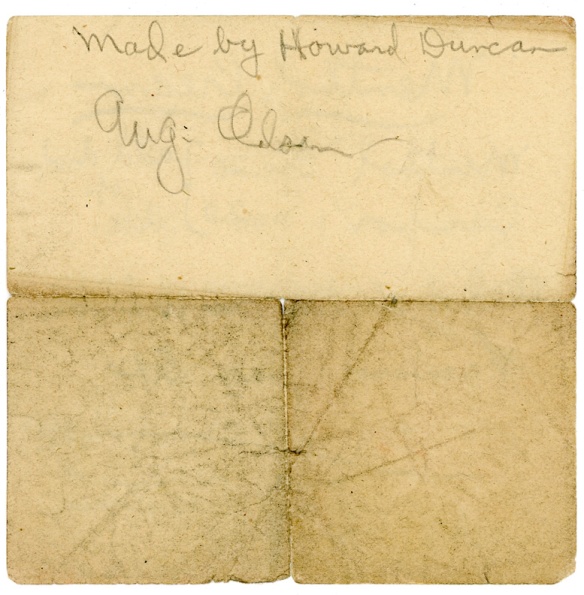 Thanks Cousin Jamie for this sweet artifact!

This is a transcript of Howard Duncan’s obituary from The DeKalb Daily Chronicle, 15 April 1910:

DeKalb residents were pained yesterday afternoon to hear of the death of Howard William Duncan who passed away about three o’clock at his late home on North First street after an extended illness.  He was taken sick last December and has been in bed nearly all of the time.  He gained somewhat for a few weeks but had to take to his bed again and failed steadily until the end came yesterday.
Howard William Duncan was born in Osage, Iowa, December 11, 1882.  He came to DeKalb in 1896 and attended school in this city.  Later he entered Chicago university and afterwards Northwestern from which institution he was graduated in 1904.
He was married to Margaret Crosby of Maple Park, August 2, 1904.  Of this union, one daughter, Dorothy, was born.  Since his graduation Mr. Duncan has lived most of the time in Chicago where he was employed as a druggist.
Besides his wife and daughter, he leaves a mother and two brothers here and one Dr. Clifford Duncan, in California.  The funeral services will be held tomorrow afternoon at 2:30 o’clock from the home and will be private for the family and very near friends.  Rev. Mead will have charge of the exercises and Thomas Olsen will sing.

On 15 July 1947 my aunt Barbara Claycomb married Roy Davis in Los Angeles, California.  Because most of her friends and family were far away, they sent out either an invitation or an announcement.

From her satin covered wedding book:

And the guest register:

And one of the many unofficial certificates:

This is the eulogy we wrote for Mom’s memorial service in April 2001.  Today is her 100th birthday.

Harriet Lorraine Duncan was born December 2, 1914, in DeKalb, Illinois.  She had an older sister Helen and a younger sister Barbara.  Her parents were Roy and Albie Duncan and they provided the girls with a delightful childhood of picnics, church socials, ice skating parties and trips to Lake Geneva in Wisconsin.  Her grandparents, aunts, uncles and cousins all lived within the DeKalb area and family gatherings and reunions were standard fare for holidays.  She continued this tradition throughout her life.  Her mother died when she was 12 and Harriet was raised by her grandmother until her father remarried.

High school was followed by two years at Northern Illinois State Teachers College – now known as Northern Illinois University.  A spirit of adventure and a taste for seeing other people and places was strong at this time.  She and several friends took road trips to Chicago, Wisconsin, Kentucky and far away New England.

Harriet Claycomb on way to California 1939.

Her first job was in the office of the Central Illinois Power and Light Company and it was there that she met the young Frank Claycomb.  Harriet’s urban upbringing was in contrast to Frank’s farm background – but Cupid doesn’t make decisions based on logic and the two were married on April 11, 1936 in the DeKalb home of her father.  Frank’s career in the electrical industry took them to homes in St. Louis, Detroit, and then west to Beverly Hills and Pasadena.  Harriet admitted that she secretly cried when their 1938 Ford crossed the desert – wondering how she would survive in this obviously desolate country far from the lush green beauty of the Midwest.  In behavior that was her trademark, she looked for and soon found the beauty of our southern California and eagerly took short trips to our mountains and, yes, to the desert too.  Their first two children, Jeanie followed by Tom, were born in Hollywood Hospital.  Their third child, Donna, was born five years later in San Diego at Mercy Hospital.  All five of Harriet’s grandchildren are here today along with three of her five great-grandchildren.

Another career move brought them to San Diego in 1945 and then in 1946 to a five-acre ranch in Eucalyptus Hills when the country life called again to Frank.  Lakeside in the late 40’s and early 50’s was rural and remote when compared to today.  Harriet, like most others then, washed clothes in a wringer washer and hung them to dry outside.  She learned to can fruit and vegetables grown in the garden, packaged meat from the chickens, turkeys, cattle and pigs raised on the ranch  – and at least once rendered the lard.  She made jams and jellies from figs, peaches and apricots.  The messiest to make and the best to eat was the pomegranate jelly.

She learned how to feed the animals, move the sprinklers, and even learned Spanish to speak with workers.  But the remoteness of Lakeside was lessened when Harriet got her first car – really a truck, a 1929 Studebaker that was named the Oyster.  It wasn’t suitable for any road trips to New England, but it found its way many times to Lakeside Union Grammar School, the Lakeside Theatre, Little League games, meetings for cub scouts, brownies, then boy scouts and girl scouts.  She once used the Oyster to haul a lamb to Mrs. Lyons Kindergarten class for ‘sharing period.’  Regular trips also went to Barker’s market, Watkin’s Bakery, Minchow’s service station and to the Presbyterian Church.

Once all the children were in school, Harriet went back to work part time.  She enjoyed her years as a secretary for the Mother Goose Association, the Rios Canyon School, and later with the SDSU Astronomy Department.   She occasionally sold Tupperware, Avon

cosmetics, and jewelry at parties held at customers’ homes.  Somehow she found time to paint, in oils and watercolors.  Not many of you knew that she wrote and published short stories and poetry – not unless you read “Modern Romance” magazines during the 50’s and recognized her pen name, “Harriet Lorraine.”  She joined Toastmistresses to learn public speaking.  Harriet volunteered for the PTA, the Grossmont Hospital Pink Ladies, and visited local convalescent homes to visit with patients.  Not surprisingly, when it came her time to live in an assisted living environment, the first thing she wanted to do was learn the names of all the residents.

She was a positive, enthusiastic person who was eager to travel and always open to learning.  In fact, she never stopped learning.  She took adult ed classes, computer classes; Elderhostel trips to study history, birds of prey and geology.  She studied to become a docent at the Natural History Museum in San Diego.  During her work with the Astronomy Department she volunteered for field trips and studied maps of the sky to learn the names of constellations.  She traveled much of the United States during her 86 years and especially enjoyed three weeks in Africa visiting Donna.  Harriet loved movies, plays, concerts and she read voraciously.  Many of you here today have traded books with her.  Perhaps the only thing she always wanted to do but didn’t get done was to learn to fly an airplane – something she wanted ever since seeing the barnstormers perform when she was young.

She was a mother who truly enjoyed doing things with her children.  Together they baked cookies, pies, cakes and candies.  Neighborhood children joined in taffy pulls.  She planned birthday parties with themes.  She encouraged numerous high school slumber parties in her home.  When the family camped in the Sierras, she cooked over a campfire.  She was willing to try anything the family wanted to do.  She went deep-sea fishing with Tom and caught a 20-pound yellowtail.  A brief try at horseback riding with Donna ended only after a broken collarbone.  She made certain her children’s education included plays, dance lessons and music lessons.  She was the family anchor for holiday gatherings.

Harriet and Frank often went square dancing with the Eickhoffs and Buckelews.  Harriet made the skirts and blouses she wore dancing.  She also crocheted afghans, key-chains, and potholders by the hundreds.  Harriet loved to swim and especially enjoyed the beach.  Harriet and Frank would travel with the Humphries on trips strictly limited to funds gathered from penny and nickel bets on their card games.  She played bridge, canasta, charades and a great game of  “Go” and “Hand and Foot.”  She often won, leading to her oft heard statement, “I was born lucky.”  If an event had door prizes – she would invariably win one.  She won the family’s first color TV set in a contest at a local grocery store.

Soon after moving to San Diego in 1946 Harriet was invited to join Sankas, a group of eight women who got together every month.  Sankas began as a bridge group, shifted to a sewing circle, and finally settled on having lunch together.  Harriet attended her last meeting with Sankas less than a month ago.  These close friends of 55 years have gathered for all the important times in each other’s lives.  Three of the four remaining Sankas are here today.

This was a woman who seemed to relish all phases of her life. She fondly remembered having candles on a Christmas tree, but was later thrilled to have her grandson help put up the strings of Christmas lights.  She remembered when talking movies first began but was still enjoying the TV broadcast of the Oscars the night she died.  As a young girl, she danced the Charleston but still felt the powerful beat of today’s music.  She traveled cross-country in a Model A Ford, then by passenger train, and then by jet plane.  When we began making rocket trips to the moon you could see a faraway look in her eyes.

Harriet was a friend to many.  She was a good neighbor well beyond the house next door.  She loved her family unconditionally.  She was compassionate and openhearted to all people, regardless of status.  Harriet Lorraine Duncan Claycomb probably was “born lucky.”  But those of us gathered here today know that we were lucky to have shared her time on earth. 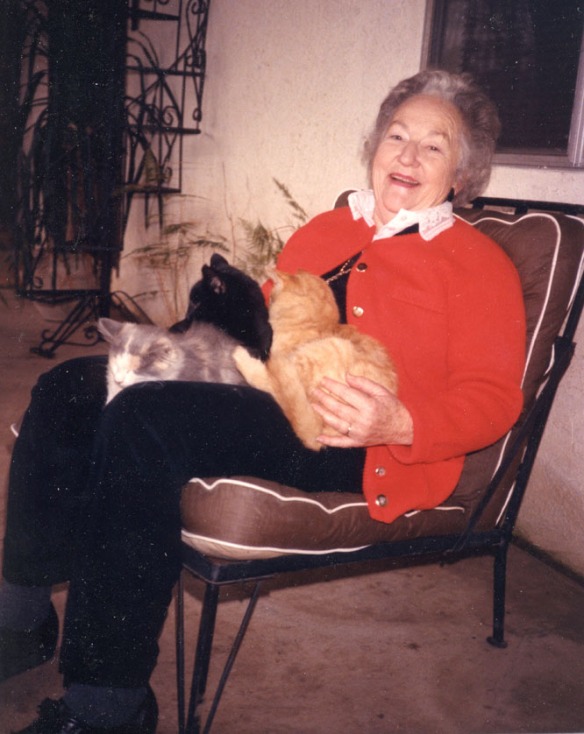