The woman in the hammock is my great-grandmother, Anna Sarah Townsend Claycomb (1864-1892), wife of Frank Erwin Claycomb.  She is at a TB sanitarium in southern California, possibly Pasadena.  The year is about 1892.  I can’t prove it, but the family story is that the toddler is her youngest child, George Francis Claycomb, born 1889.  George becomes the father of the ‘Idaho Claycombs.’ 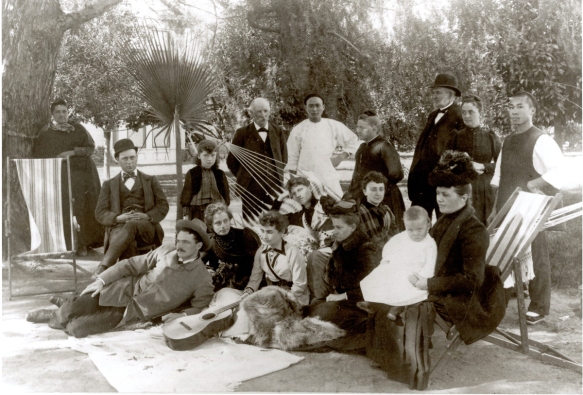 Her residence was in Sycamore, illinois, but she made this trip to improve her health.  It wasn’t successful.

The photo is interesting because of the formal dress on people (family?) and the Asian care takers.  I’m glad they are included in the photograph.

Part 1 can be seen here.

Anna and Frank married 27 December 1882 in Sycamore, Illinois and began their married life on a farm near Cameron, Warren county, Illinois.

At some time in her life, probably before her marriage, Anna learned to paint.  And as many of the women of her era did, she copied popular paintings.  At least one still exists – her painting of the Pharoah’s Horses originally done by John Frederick Herring.  She continued painting after her children were born. 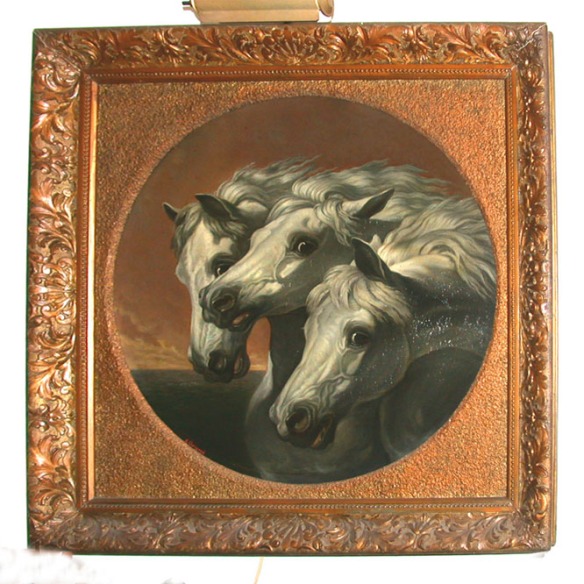 She wrote to her brother Frederick Townsend on 13 February 1885.  A curious part of the letter is “Fred, are you aware that I am all of twenty one years old, and Nellie will be six months old, one week from today.  When I get to thinking everything over that happened while I was at school, I don’t see how I could have done so, and I get to crying about it, and I guess Frank thinks I am a goose!  I know it makes him feel badly, because he doesn’t know what I am crying about and thinks I’m not happy.  Dear little Nellie was a God-send if ever there was such a thing…”  I do wonder what that is all about. 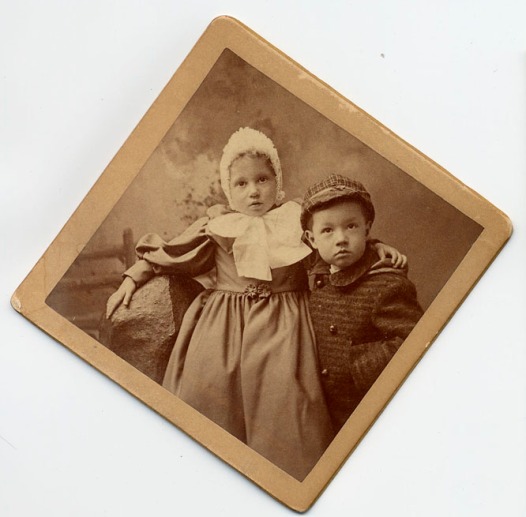 Frank and Anna’s first son, Amos Townsend Claycomb, was born 29 January 1886.  In another short letter to Fred, she mentions the children. 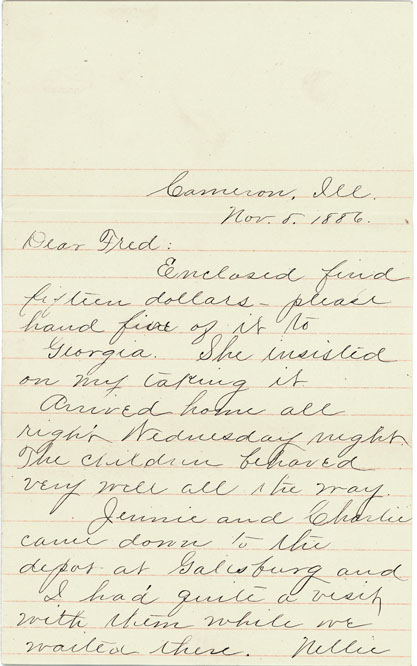 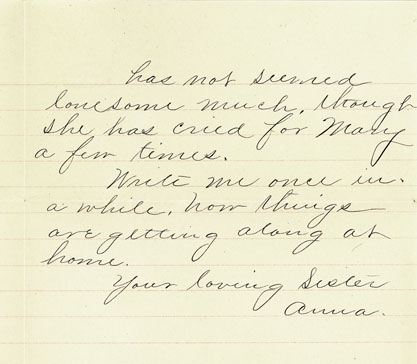 On 21 April 1887 Alta Louise Claycomb was born in Warren county.  She almost always went by the name Louise.  She has aunt Alta on the Claycomb side.

In 1888 the family moved to Sycamore, Illinois.

George Francis Claycomb was born in Sycamore on 5 June 1889.  That Fall Anna’s health worsened and she went to a sanitorium in California.  Her mother and infant son went with her.  I don’t know how long her mother stayed, but Anna returned in May 1890. 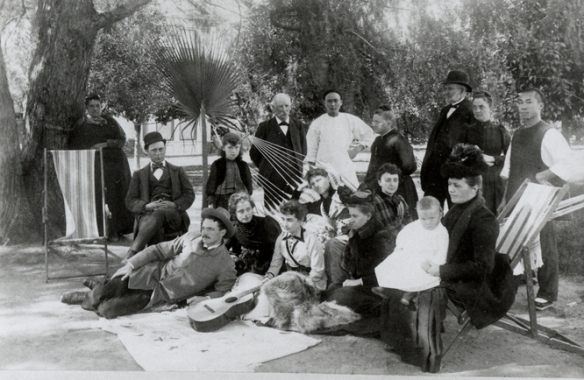 Anna Claycomb (in hammock) at the sanatorium in California, 1888/9.
Her son George is the infant held on the right.

No More of Earth

Mrs. Anna Townsend-Claycomb, wife of Frank E. Claycomb, and daughter of Mrs. E. P. Townsend, died at their home on Friday afternoon., April 8.
Deceased was born near Malta, Ill., on February 9, 1964.  In 1876 when she was twelve years of age, the family removed to the Daniel Pierce farm one mile west of this city.
In 1879 she entered Lombard University, Galesburg, Ill., where she remained one year.  It was while there attending school she formed the acquaintance of Mr. Claycomb.  After the year at Lombard University, she attended school one year at Jacksonville, following with a year at the Rockford female seminary.  At each of these schools she acquitted herself with credit and made many friends who mourn her early decease.
She was united in marriage nine years ago last December, and for six years resided with her husband on a farm near Galesburg.  Here the three older children were born.  Three years ago last November, they removed to the farm west of Sycamore.
In the fall of 1889, on account of failing health, she went to California, accompanied by her mother, where she remained until May, 1890.  She returned much improved in health, and remained so till a few days before her death, when her strength failed and death soon came as a welcome messenger.
Besides her husband and five children, she leaves a mother, brother, three sisters, and a large circle of mourning friends.
She entered into church relations with the Sycamore Universalist church ten years ago and was always a most devout and exemplary member.
The funeral was from the house Sunday afternoon, Rev. Dr. White, her old Lombard University Professor, officiating, assisted by Rev. Geo Crum, the pastor.  The interment was by the side of her father, Mr. Amos Townsend, in Elmwood. 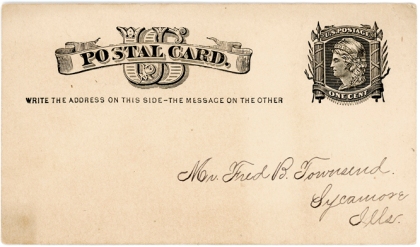 Anna Sarah Townsend was born 9 February 1864 in Malta, Illinois, daughter of Eleanor Pierce and Amos W. Townsend.  She had an older brother, Frederick and an older sister, Jennie.  She also had two younger sisters, Georgia and Mary.

The family moved to the Daniel Pierce farm just west of Sycamore, Illinois in 1876 when Anna’s maternal grandmother, Phoebe Jane Brundage Pierce, died.  This allowed them to care for her grandfather, Daniel Pierce.

In 1879 when she was 15, she went to Lombard College in Galesburg, Illinois, for a year.  This is where she met Frank Claycomb.  Anna’s mother was active in the Universalist Church and later on was on the board of Lombard College, a Universalist school.

Anna then spent a year in school in Jacksonville, about 100 miles south of Galesburg.  And then a further year at Rockford Female Seminary.  It’s interesting that about this time, Jane Addams also attended Rockford (Class of 1881).

I have a postcard Anna sent to her brother Fred in 1881 (could be 1887).  It appears to be written in a foreign language, although I think it may be a secret sibling language.  What does it look like to you?  She has beautiful, legible handwriting as you can see by the front of the card. 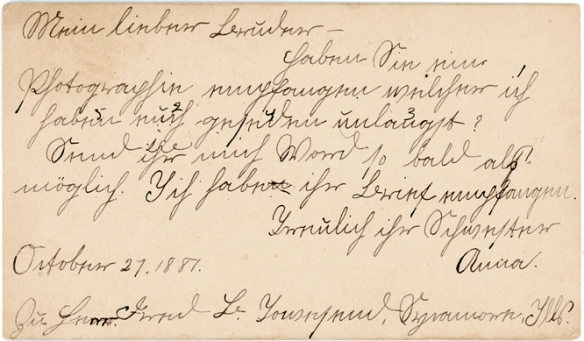 When I sat down to write Frank’s story, I realized how little I know about his life.  A few basic names and dates, but not much else.

He was born Frank Erwin Claycomb on 6 May 1857 in Warren county, Illinois.  His death certificate gives a birth year of 1855, but the early censuses are pretty clear that 1857 is more accurate.  His parents were Sarah Ann Goddard and George Washington Claycomb.

As far as I know he lived in Warren county until a few years after his marriage.

Part 2 can be seen here.