I’m calling these Civil War calling cards.  They belonged to men who served in the war with Thomas Cation Duncan in the Wisconsin 1st Cavalry.  I’m not positive that’s the proper name for these, so if you know a better name, let me know.
One is for W. H. Tripp of Milan, Missouri and the other for S. W. Harrington of Hull, Iowa. 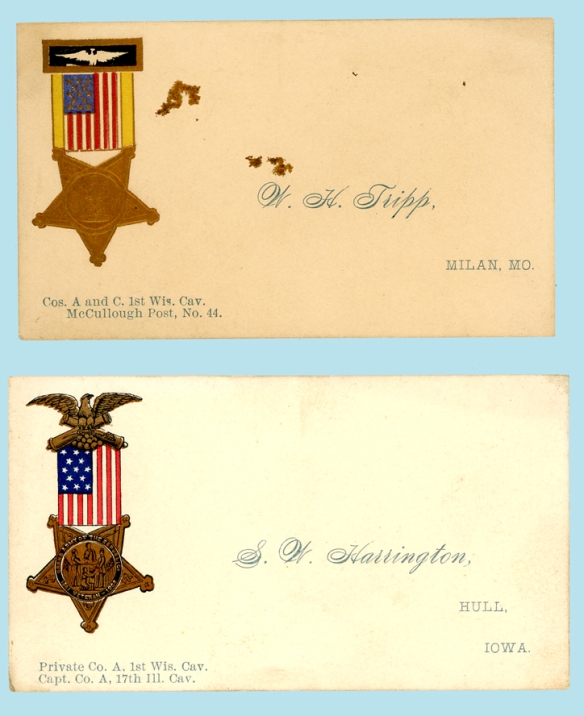 This is another set of photos that have survived away from its family.  The Chubbs were  friends of the Bresslers.  The first two photos are labeled “Edith Moses Chubb.”

This one is labeled “Mr. Chubb, 1356 4th Ave., Davenport, Iowa.”  Chubb is not a frequently heard name, so I’m guessing there’s a connection.

I found her birth (Nebraska) and death (Texas) dates online; her father was F. E. Moses; her son Niles was married to Dr. Dorothy Brewer.  I haven’t documented this properly, just offer it as a possibility.  I would love to return these photos to Edith’s family.

Eliza Cation and Thomas Duncan lived in the Ottawa/Eagle area of Wisconsin from the late 1840s to the late 1860s.  During this time Thomas applied for US citizenship.  On 20 September 1855 he filed a declaration of intent.  This document gives his year and country of birth and his date and place of emigration.  It also has his signature – one of my favorite things.

On 19 November 1858 he was granted citizenship.  Eliza did not file – only the men applied.  I don’t know if the Scottish born children of theirs (William, Thomas, and John) had to be naturalized. 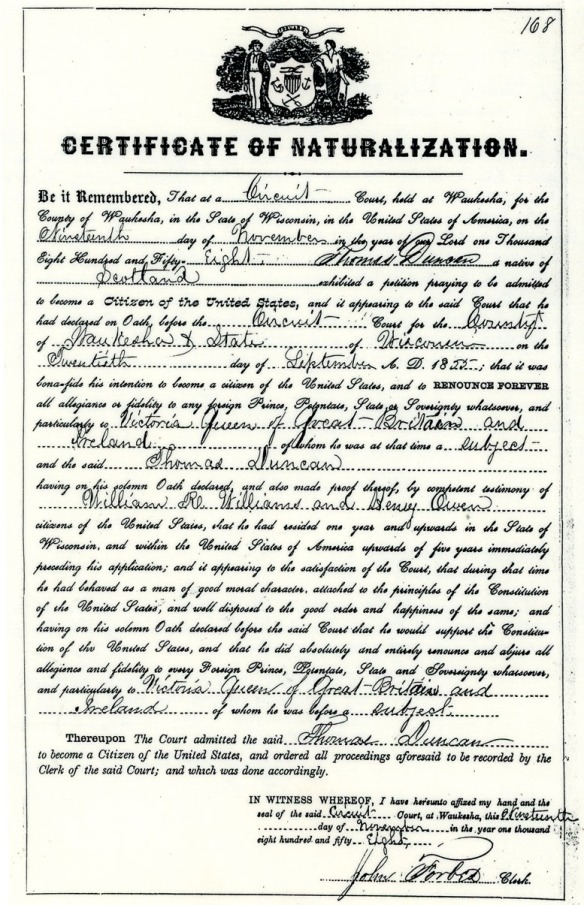 About 1880 a formal photograph was taken of the family.  I’ve posted it before and probably will again as it show so many generations in a high quality print.  My guess is that it was taken in Iowa based on the people present.

In 1886 Eliza wrote a letter to her sister and brother in Scotland.  The family of Isabelle Cation Barclay saved the letter.  I began to transcribe it, but the quality of the copy, Eliza’s punctuation and handwriting made it unlikely I could do a good job.  But here’s a photo of it.  It’s nice to see her handwriting.  And it has her signature. 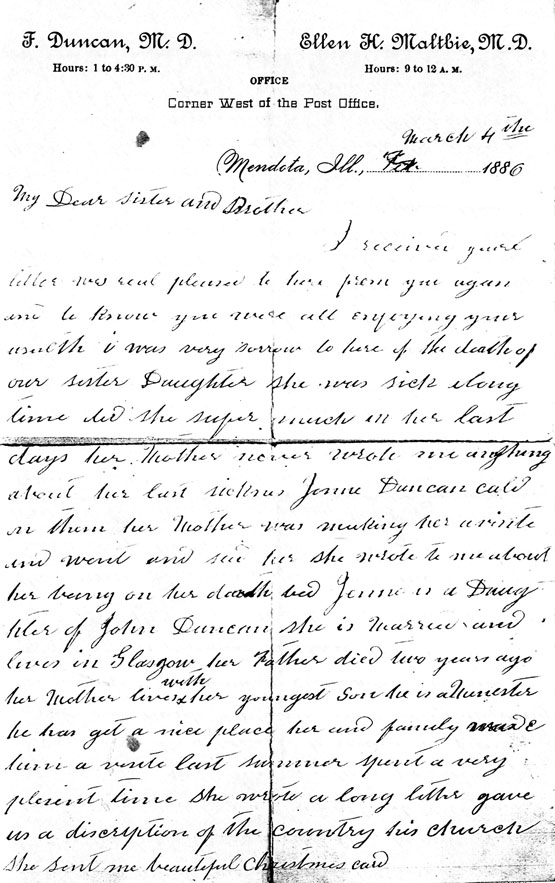 At this time they are living in Mendota, Illinois with their son Frank Duncan – and using his stationery for her letter.  They had emigrated from Scotland and lived in New York, a couple of places in Wisconsin, Iowa, and Illinois.  Several of their sons were doctors and I think at least the last years of their lives were lived in comfort.

In 1920 according to the Federal Census William Duncan Alderman’s widow Ida was living alone in Waterloo, next door to Jane Roebuck, probably her mother. 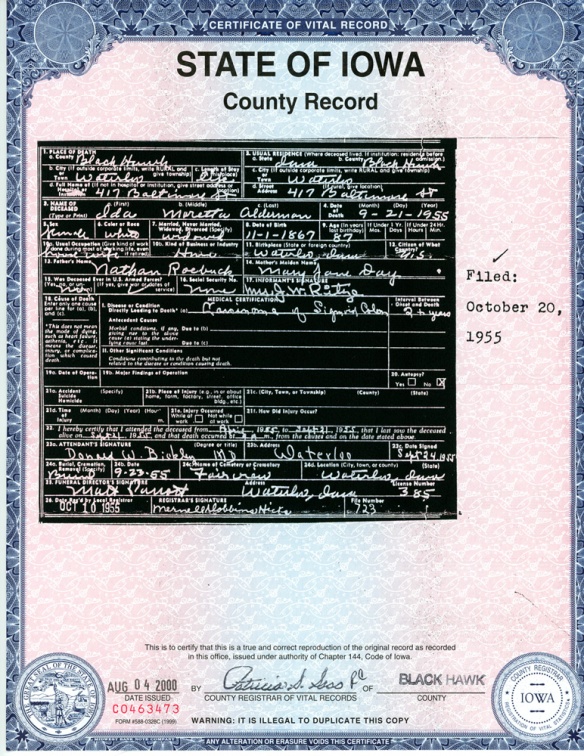 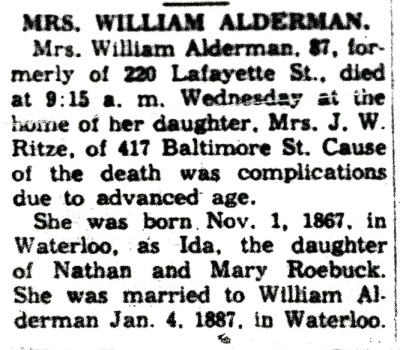 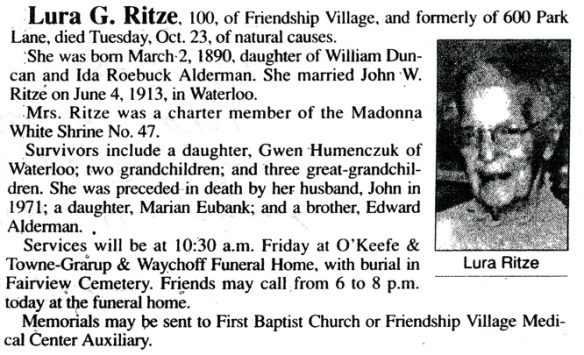 *These paragraphs and the link to Gwen’s obituary were generously provided by her son, Bill.  I am grateful to him and any others who help make this information accurate.  Thanks Bill!

James Cation Duncan is my great grandfather on the Scottish branch of the family tree.  His parents, Eliza Cation and Thomas Duncan as well as three of his (James’) older brothers (William, Thomas Cation, and John) were born in Scotland, emigrating to the US in 1842.  Another brother, David, was born in Peoria, New York in 1846.  The family continued to move west settling near Ottawa, Waukesha county, Wisconsin.  Another boy, Frank, was their first child born in Wisconsin in 1848.

Two of J.C.’s brothers, William and T.C., enlisted to fight in the Civil War.  William died from fever, T.C. returned.  J.C. studied at Milton College in Wisconsin, graduating in 1869.  Soon after that the family moved to Osage, Mitchell county, Iowa.

On 21 May 1875 James married Anna English, daughter of Samuel and Mary English.  She was born 4 May 1856 in Iowa.  Years later her brother Frank would marry J.C.’s sister.

On 10 September 1876 Anna and J.C.’s son Clifford James Duncan was born in Osage.  Seven months later on 30 April 1877 Anna English Duncan died and was buried in Osage.  She was almost 21 years old.

According to a county history, J.C. went to Chicago in 1877 to study medicine – probably with his brother Thomas who was a prominent homeopathic doctor.  He then returned to Iowa. 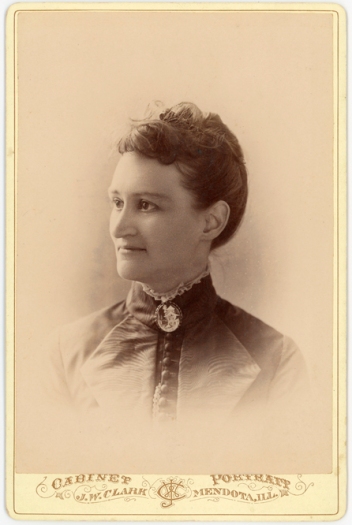 Annette Mary Jane Patchen always went by the name Nettie – even in legal papers.  [There was a genealogy lesson for me here – I had been looking for her full formal name].

She was born 2 December 1858 in Cassell Prairie, Wisconsin to Cassie Ann Rosenberry and Orson Patchen.  Her father died from illness in the Civil War in 1862.  Her mother married again, this time to Michael Gallagher, who also died in the war.

Before 1870 Cassie married her third husband, Lewis Abbott who had been married previously and had adult sons.  The Abbotts lived in Iowa.

In 1878 Cassie and Lewis have a daughter, Lillian.  Nettie’s famly consists of her mother Cassie, stepfather Lewis, brother Clarence, and half-sister Lillian. 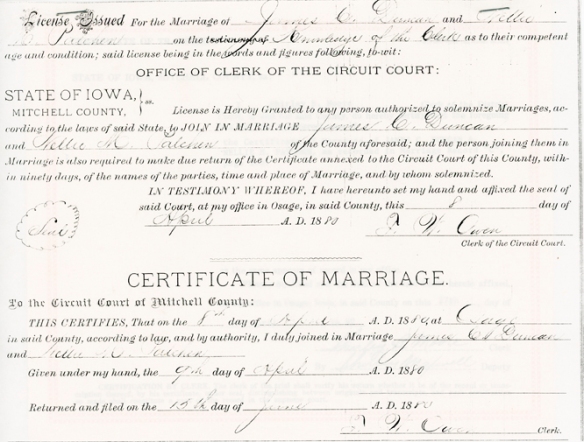