In 1924 my aunt Barb received this souvenir booklet from her teacher, Mayme Lindquist.  It seems amazing that a teacher would give each student an eight page booklet tied with a green string.  But at District 14 School in Wayne, Nebraska, there were only 5 grades with a total of 13 students, including my Uncle George.

The other pages contained inspirational quotes and poetry.

Mom (Harriet Duncan Claycomb) tried to write to her sister, Barb, every day when Barb was not feeling well.  From two of those letters I found this description of their childhood home, 619 DeKalb Ave, DeKalb, Illinois.

“…Let’s go back to 619 DeKalb Avenue for a drop in.  The entrance to the open porch used to be on the front but when they glassed it in, they moved the steps to the driveway side.  Inside the front door was a cold register where we put wet boots and galoshes.  Was that register to just let in fresh air?  Next to it was the Victrola.  My favorite records were Stars and Stripes Forever, Beautiful Ohio, and Saxaphobia.  Next was the stairway with a bannister I loved to slide down.  Below that was the chest seat where we sat to put on boots—open the lid and there were rubbers, galoshes, and roller skates.  Next was that gloomy dark closet under the stairs.  Inside were card tables, carom board, golf clubs and tennis racquets.  Across from the closet door were originally coat hooks like the ones in cloak rooms at school.  They were removed when the phone was moved from the wall facing the kitchen to the hall wall opposite the closet. 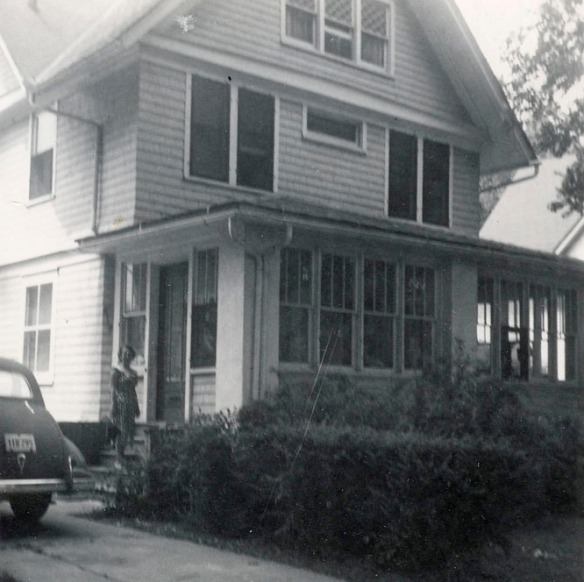 I loved the sliding doors into the living room.  Sometimes the music case stood just inside on the left—it held all the Sherwood Music course they bought for Helen to become a concert pianist I think.  She did pretty well at that.

Around the wall were built-in benches on two sides.   They were oak and pretty and next to the bookcase.  Kind of handy to take out a book and sit right there to see if it was readable.  Then the big window facing Judd’s and then the piano.  Mother had all the new songs and kept most of them in the bench along with a hymnal and 101 Best Songs.  I remember Yes Sir That’s My Baby, The Song is Ended but the Melody Lingers On, Barney Google with his Goo Goo Googley Eyes, Dream Kisses, My Buddy, Just a Memory, Among My Souvenirs, and on and on.  When we had company, sometimes Mother would play and Helen would sing Alice Blue Gown and she was darling.  The sofa was opposite the piano and had a hot register between it and the dining room where we stood to dress many a chilly morning.

Inside the dining room on the left was the Morris chair, the radio with headphones and a window facing the street.  There was a buffet under the high window, the sewing machine next and then the china closet.  Why did we say ‘closet’?  Or was it cupboard?  Then the door to the pantry.  When we had adult company, we three would make blanket beds on the floor by the door going to the kitchen—it was a lark.  Our old dining room table was round like everybody’s but Florence got a bigger maple oblong one when she came.

Nothing unusual in the kitchen—stove, kitchen cabinet, wooden table and the sink.  Outside on the landing to the basement was the icebox with the dishpan underneath.  Then about four steps down to the back door.

How about going upstairs?  We’ll take the back stairway and stop at the landing to look out the window.  Who lives in Gunn’s house now?  Is there still a big garden in back with asparagus and much more?  On up to the hall and the linen closets facing us.  Big drawers.  I used to send for samples of anything there were coupons for in the magazines—had miniatures of everything from tea to mascara.  Then I started sending for movie stars’ pictures.  They always sent 9×12 glossies autographed.  So I took up one of those big drawers in the hall.  Don’t know what was in the other drawers but in the cupboards above were towels and sheets.  Turning left was the big bedroom with the knotty pine furniture and the little alcove bedroom beside, and a tiny closet.  It seems to me we changed room arrangements often so the only room with a name on it for me was across the hall “Grandma’s room.”  I know I had a turn in each of the others.  The closets in the two rooms on the attic door side had slant roofs and you couldn’t stand up where the slope went down.

Well, that was all very boring—let’s try the attic.  Narrow stairs with the light switch on the left.  Hot in summer, but nice in winter.  On nasty days we often played up there.  Boxes of books always fascinated me—I remember poring through “Everything a Man of 40 Should Know.”  I doubt if I was much better informed after reading that.  The front windows had flies in them.  Boxes of treasure like a photo album with dozens of beautiful lacy valentines glued in.  There was a black knit dress form, rather shapely.  Over center towards Judd’s side were the chests of clothes.  Fantastic old fashioned dress and hats and even a corset.  We dressed up many a day in those clothes.  Some days we planned plays that we would put on and charge 3 pins to get in.  Guess there weren’t any stage stars among us because we fell flat.  In the next corner towards the garage were “Grandma Oakland’s things”—hands off.  The last corner had junk like an old fan, pans, and a chipped enamel table.

Well, my dears, that was a fizzle, so I’ll go outside.  Across the front of the house was Bridal Wreath with Lilies of the Valley below.  Remember the skinny strips of cement back to the garage for the wheels to try to stay on?  There were lush peony bushes under the 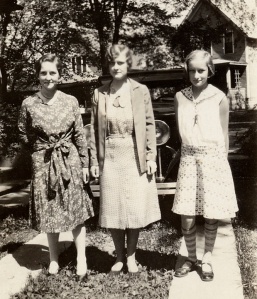 Harriet, Helen, and Barbara Duncan on those “skinny strips of cement.”

window where the sewing machine was inside.  The peonies were beautiful but usually were crawling with little black ants.  From the front porch to the sidewalk was a hedge that had tiny tart leaves—I always put a leaf on my town and nibbled it.

Behind the garage were currant bushes against the fence, then two cherry trees, then garden bordered by rhubarb.  We had a martin birdhouse in the center of the yard on a pole but I don’t remember any tenants for it.  Sometimes we played croquet in the back yard.