Just the shoes, not bronzed as they would have been a generation earlier. Maybe that’s why the folks saved them – to bronze later.

Seems I was rough on shoes as a toddler. They are quite worn and scuffed. Some things don’t change.

They carried books in the trunk of the car and delivered to patrons. Put 25 cents in the envelope inside the back cover and you could keep the book for a week.

This envelope is from “All This and Heaven Too” by Rachel Field, 1938.

I don’t know who George Dooley and Karen (8 months) are, but it’s a nice photo that someone might recognize.  It was in my Aunt Barb Davis’ album.  Taken during WWII or shortly thereafter.  Maybe in the Los Angeles CA area.

Julia Bressler is my great-grandmother.  I’m guessing that Clara Ellis was a friend, perhaps from church.  I never heard of Clara, but I love this photo.  I like the similarity of their pose, their hands, and the fabric print of their dresses.  They are wearing lace-up shoes with low heels.  From the look of Clara’s ankles, her feet hurt.  Julia was born in 1859; she’s 86 in this photo.  February 1945.  Probably Wayne, Nebraska.

In the first blog post I questioned whether Dad had gotten this car.  There’s no photo of it.  But he did get it.  He went to Detroit from Los Angeles to pick it up and drive it home.
We can follow his route from Detroit – he first visited family in DeKalb, Illinois and then Wayne, Nebraska.  Then Denver and south to Albuquerque, New Mexico.  Holbrook, Kingman, Barstow, to Hollywood – sounds like Route 66.  Then he used it as he called on customers in southern California and Arizona. 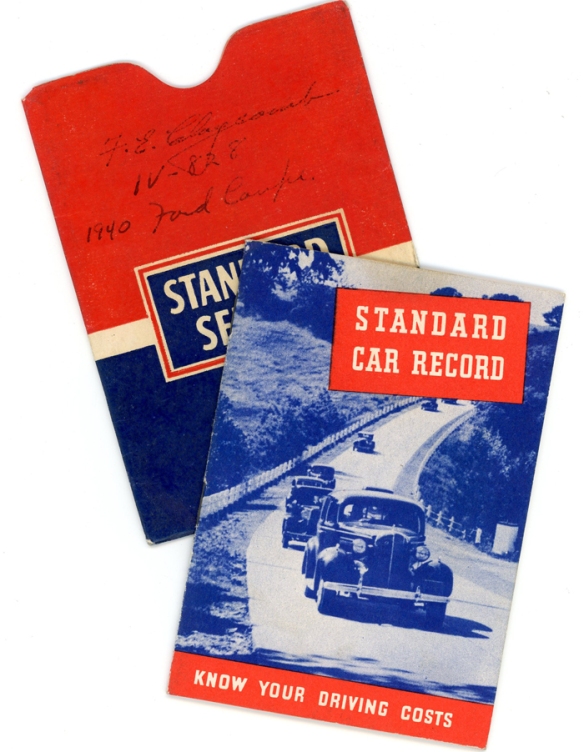 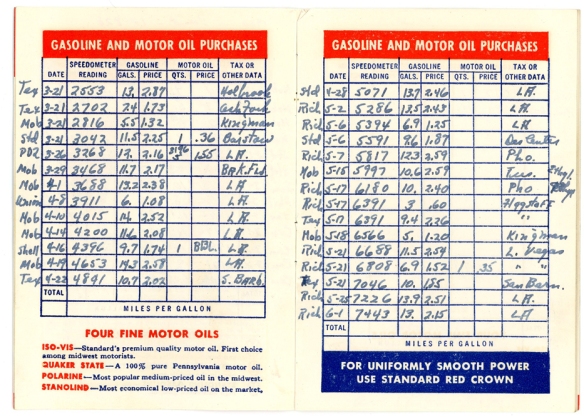 Here’s the description of the car and his contract. 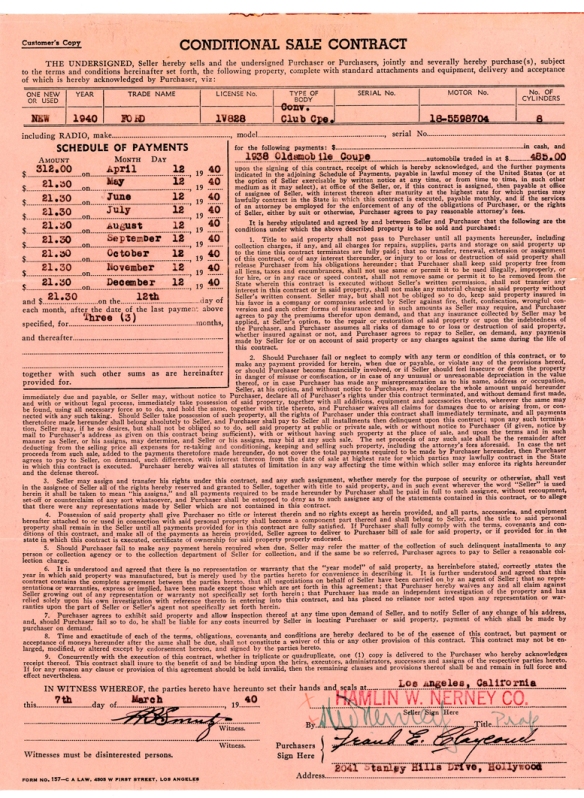 Wouldn’t it be fun to do that same trip today in a 1940 Ford convertible?

My brother, Tom, provided much of this story including the photos. Our father, Frank Claycomb, liked owning and driving cars. He was born in 1915 and grew up in a small rural town in Nebraska, so cars were still a bit of a novelty.

His grandfather was a prominent man who bought a car for each of his grandchildren when they graduated from high school. Dad’s brother, John, had gotten one the year before when he graduated.

Dad fixated on that idea and researched, studied, and figured out just what car he wanted for his 1931 graduation. He spent the entire year pestering the auto dealers in Wayne, comparing the various possibilities and their prices. Either the Ford or the Chevy.

1931. The Great Depression. When graduation day arrived Grandpa Bressler handed him an envelope which when opened yielded a five dollar bill. He had decided he could not afford to buy a car for the graduates. Dad was devastated. He said he was angry and hated his grandfather. Eventually he came to realize that this depression was real and actually impacted the family and him. Prior to this painful event he hadn’t realized what was taking place in the country.  He told this story until the end of his life.

My aunt, Barbara Claycomb Davis, kept a photo album packed with dozens of photos from the late 1930s to the mid-1940s.  I decided to select photos to give you an idea of her life after high school through her years at business college in Chicago. 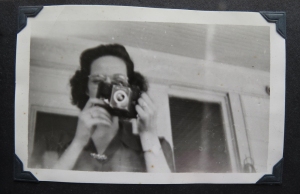 She was born in 1918 on a farm in Wayne,
Nebraska. After high school she went to the city for more schooling.  The farm girl made the adjustment well and had many friends there.

Not all the photos were identified or dated, but it doesn’t seem to matter.

The one thing I’ve learned about Barb is that even if the people aren’t named, the animals will be.

Grandma Ve (Evangeline Shattuck Claycomb) was Barb’s step-grandmother. Her house in Sycamore, Illinois is where my father was born.

This is a little speculation, based on what my mother told me. I believe Floyd Snodgrass was Barb’s first love. I don’t know what happened to them, but they stayed in touch for the rest of their lives.

Barb was always a horse person. It was one of our earliest bonds. 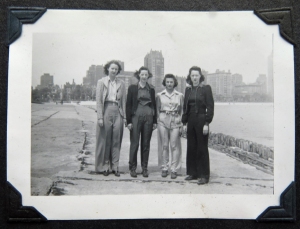 Sunbathing on the roof.

Glea, one of her life-long best friends.

And when the Chicago girls came to Wayne to visit, the farm entertained them. 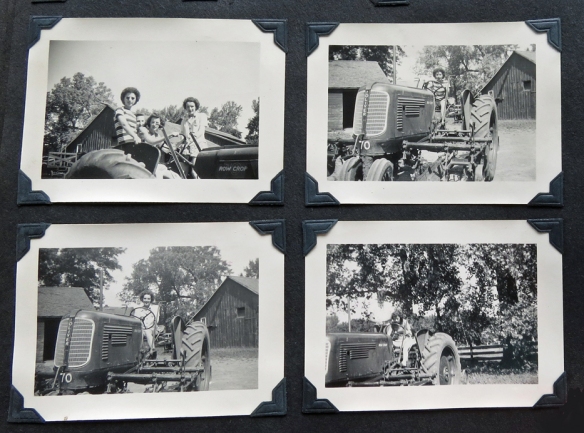 Travelers ready to see the world. 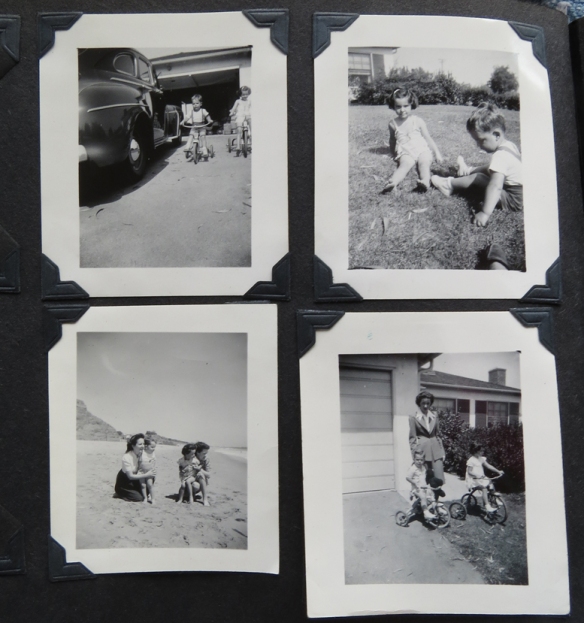 A trip to Los Angeles in 1943 to see Barb’s brother (my father) Frank’s family.

And a few pages for her brother George, stationed in Alaska during WWII.

A letter written to my father (Frank Claycomb) when he was 5 years old. From his Uncle John (Bressler).

Has your pony come yet? Tell your Daddy I have been by Mrs. Snyder’s several times, but have never been in. What do you do all the time?

I will send this letter to you by airplane to Omaha and then from there to Wayne on the train. With love, Uncle John.

In his ledgers my grandfather, Amos Claycomb, made an inventory at the end of the year. From 1917 to 1921 he lists a blind horse. I have never heard the story, but I’m surprised that he kept this horse. He farmed in Wayne, Nebraska.

There are two pages for each year. The horses are the first listed. I included both pages – there are interesting items on both pages.

Two photos of where I grew up in Eucalyptus Hills in Lakeside, California.  The first is about 1948 with my brother and sister playing in the rocks above our house (not in photo).  This is my childhood and I loved it.  The second was taken by a friend (thanks, Ed) about 2015.  It’s why I don’t live there anymore.  At least the rocks are still there.